“Today, Indian telecommunications network, is the second largest in the world, with the most cost-effective rates. This growth has been spurred, by the market friendly policies of the Modi Government.”, said Shri Devusinh Chauhan, Minister of State for Communications while elaborating upon the success story of growth of telecom sector in India. Addressing the inaugural event of International Telecommunication Union’s Regional Standardization Forum (RSF) for Asia and Oceania region, he said that India’s policy in the field of telecommunications formulated under leadership of Prime Minister Shri Narendra Modi is basing on 3 pillars of- “Ease of Doing Business”, for the industry; “Ease of Living”, for all citizens, including those, who are living in rural and far-flung areas; and “Atma Nirbhar Bharat – that is – Self Reliant India”. 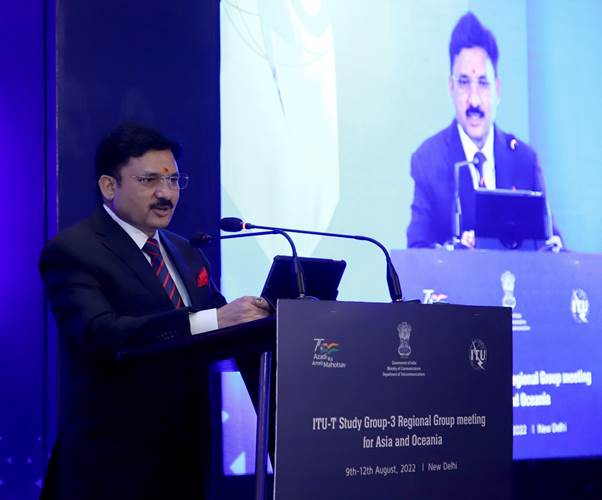 Talking about the positive, and forward-looking environment created by telecom reforms in India, the Minister Shri Devusinh Chauhan said that these reforms have been able to promote healthy competition, protect interests of consumers, infuse liquidity, encourage investment and reduce regulatory burden on TSPs.’ “As a result, recent 5G spectrum auction, in India has fetched bids of 20 billion dollars. This very well, reflects the confidence and sentiments, of the Indian telecom industry.”, he said.

To extend the state-of-the-art telecom facilities, to the last person of the society and in sync with the ‘Antyodaya’ philosophy, Shri Devusinh Chauhan said that the Hon’ble Prime Minister of India, Mr. Narendra Modi has laid down a clear roadmap to address the digital divide. It includes taking optical fibers to all 6 lakh villages of the country, and also cover all these villages with 4G mobile communications. He informed the participants that around 1,75,000 villages are already provided with the optical fibre, while around 5,60,000 villages have 4G mobile facilities. A multi-billion-dollar, comprehensive plan has been made, which will ensure optical fibre and mobile communications in all six hundred thousand villages by 2025.

Apprising about the 5G rollout in the country, Shri Chauhan said that the Government of India, is promoting, the indigenously designed, developed and manufactured advanced telecom technology. As a result, India today, has a strong home-grown, 5G mobile communications ecosystem. “By the end of this year, we are likely to see indigenously developed, and manufactured 5G stack, getting deployed, in rolling out 5G network in India. Our engineers have developed, a set of 5G standards, which will facilitate the spread of 5G network in rural area.”, he said.

Highlighting the role of ITU in sustaining and furthering the rapidly changing Telecom/ICT landscape, Shri Chauhan said that ITU has been playing a unifying role in forging strategic cooperation and understanding, between all stakeholders. India has a long association with ITU, and we share common ideals, regarding the telecommunications landscape.

Shri Devusinh Chauhan said that in line with ITU, India is also deeply committed, to connect the unconnected, and protect and support everyone’s right to communicate. India will continue to broaden and deepen its contribution in fulfilling the vision and objectives of the ITU, he added further.